THE HISTORY OF ST JOHN'S 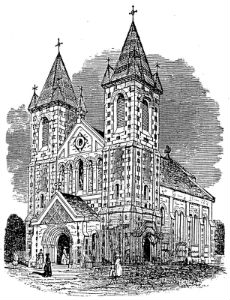 Until the early 19th century the land upon which St John's Church was built was a field owned by All Souls' College, Oxford. The shape of the field can still be seen as it borders the Harrow Road and Kilburn Lane. All Souls' was also to donate the land which became the west London cemetery, whose official name is "All Souls' Cemetery". In the 1880's All Souls developed its land north west of Kilburn Lane, hence All Souls Avenue and College Road. Many of the other roads were named after leading College fellows. 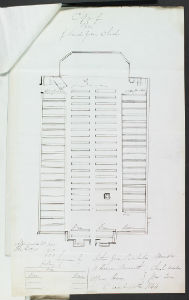 St John's was built as a response to the growth of London, although in 1851 only around 800 people lived around Kensal Green. The church opened in 1844 and contemporary prints show it in a rural setting. This archive image (courtesy of Lambeth Palace Library) shows the original ground plan of the church. The signature of the first vicar, Arthur Gore Pemberton, can be seen in the bottom left corner. The document is also signed by the celebrated 19th century author, William Harrison Ainsworth who was one of the first churchwardens. 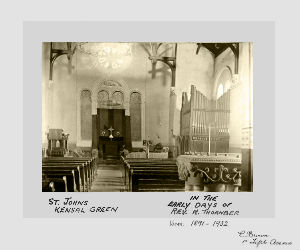 The church interior also looked very different. At the east end was a flat wall with a rose window which was replaced in the early twentieth century by a new chancel (including the present stone High Altar) and was consecrated in March 1903. Pews once filled the church and both the organ and font were in different positions.

In the early 19th century new vestry rooms were added to the original vestry; the latter becoming a boiler house. In 2016 the old vestry was restored to its original use following the relocation and replacement of the boiler.  The archway which surrounds the statue of Our Lady of Walsingham was originally the site of the door into the vestry, long since blocked up. 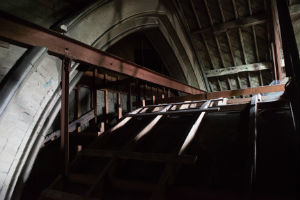 Until  the second world war the original ceiling, arch and chancel ceiling decoration could still be be seen. However following war damage (which destroyed much of the original glass) the church required structural support and steel beams were erected to support the roof. A ceiling was then placed beneath the beams which remains in place today but,  it is still possible to see the original roof via the bell tower.  Sharp eyed visitors will notice that the window beneath the clock face can be seen from outside the church, but not from within! The chancel ceiling decoration, painted at the very end of Queen Victoria's reign, is in remarkable condition but hidden from view by a panel.

In 1944, St John’s centenary year, the rood (the wooden crucifix and statues of St Mary and St John) was erected as an act of thanksgiving for 100 years of church life.

The church clock was added to the church in 1916 and in October 2016 we celebrated its centenary. There is one church bell, although the south tower was intended to hold more; something that might well be realised over time. 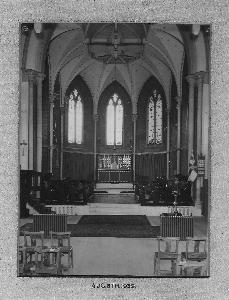 St John's Church was Consecrated on August 8th 1844 by the Bishop of London and on 6th July 2014 we celebrated St John's 170th Anniversary. A service of thanksgiving was held for the recent restoration work and renewal of the church clock. The service, led by the Bishop of Fulham, was attended by many friends of St John's and past parishioners. The occasion also provided an opportunity for focusing on the future, particularly our development plans so that we can offer our church for wider community use. 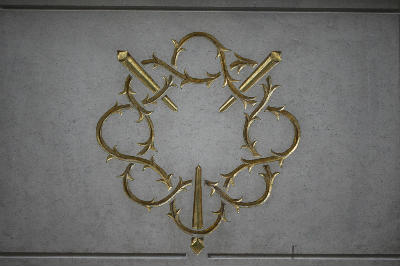